A Revelation by Steve Newman

My discovery of Hemingway and Lawrence came about as a result of a new English teacher: a fresh-faced young Welshman called Mr Jones who, in 1960, had been parachuted into Hugh Clopton Secondary Modern School in Stratford to teach the town’s ignorant young plebs the joys of literature.

Until the arrival of Mr Jones the teaching of English literature in what is now the High School revolved wholly around Shakespeare and was done very badly by an old grouch of a teacher who would - once we’d started to read one of the Bard’s plays aloud, with each pupil reading a verse - fill and ignite his sooty old pipe before settling down to read The Times.

On one occasion our enthusiasm for reading dipped into silence bringing a pipe-clenched fanatical rebuttal from the teacher which suddenly resulted in a brave fellow pupil throwing his copy of The Collected Plays of Shakespeare at said teacher, which dislodged the teacher’s now roaring pipe onto his newspaper which quickly burst into flames. The commotion that followed brought the headmaster (a brave member of the SOE during WWII) running into the room, dousing the flames with the contents of a tea-cup he’d been holding when the rumpus started. He then simply led the bewildered teacher out of the classroom.

A couple of days later the blessed Mr Jones floated down with a suitcase full of books.

Mr Jones was very young indeed and slightly hesitant, but with an accent close enough to Richard Burton’s to make us take notice. Shakespeare went out of the window and out of the suitcase came Sapper’s Bulldog Drummond, James Joyce, Ian Fleming, and then, via Charles Dickens, Ernest Hemingway and D. H. Lawrence.

It was a revelation.

Mr Jones filled generations of Stratford boys with his love of literature, which did eventually include Shakespeare, helped hugely by several daytime visits to the local cinema to see Laurence Olivier as Hamlet and Henry V, which we re-enacted with enthusiasm back in the classroom. Jonesy (as he was soon called) stayed on in Stratford for the rest of his teaching career, retiring in the 1990s.

What Jonesy gave us was his enthusiasm and permission if you will, to read whatever we pleased, but at the same time to look at the lives and work of Lawrence and Hemingway – and legions of others – and to try and see, and understand, what might have turned them into the writers they became.

It was certainly Jonesy’s influence that eventually turned me into a playwright with my first play produced at the Edinburgh Fringe back in the 1980s, after which I gave it up to write RSC reviews and magazine articles about writers and literary history.

Then, in 1997, with two other Stratford playwrights, I co-founded The Bird of Prey Theatre Company, which is still going strong. I tend to write plays about historical figures, such as Walt Whitman and Oliver Cromwell, although I’ve never written a play about Lawrence and Jessie, at least not yet. 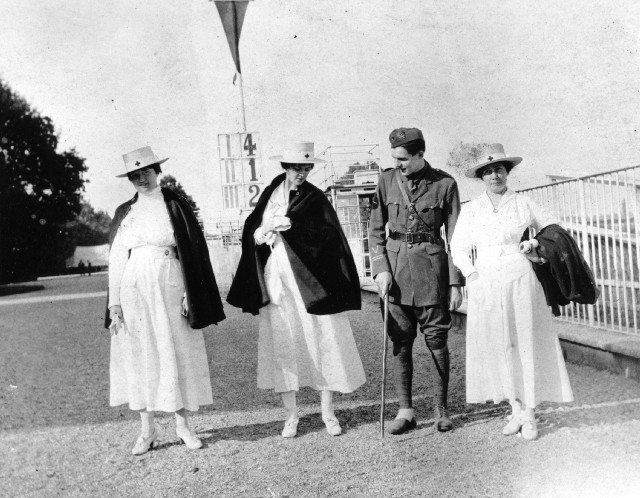 Of course Lawrence’s relationship with Jessie has become more understood as the years have passed, but there were other writers who had similar experiences, not least Ernest Hemingway who, in 1918, serving as an ambulance driver with the American Red Cross in Italy, was badly injured in a leg by an Austrian mortar shell that exploded while the nineteen-year-old Hemingway was delivering mail and chocolates to the men in a front line trench in a valley at the base of the Dolomites. Several soldiers were killed but Hemingway, still conscious, began to drag a badly injured soldier to safety, but before he’d crawled more than six feet, he was hit in the same leg by a burst of machine gun fire, and although in severe pain, and bleeding profusely, he continued to drag the now unconscious Italian infantryman toward the trench and eventual safety. Hemingway blacked-out.

Her name was Agnes von Kurowsky. The young couple soon fell in love, with Agnes bringing the young American back to life and, like Lawrence and Jessie, often reading together. When Hemingway was much recovered Ernest and Agnes went walking in the nearby park where they listened to the military bands, drank Camparis at the cafes before going to the opera house.

They talked of getting married, but due to Agnes being suddenly transferred to another hospital nearer the front it never happened. Hemingway was then sent home to Chicago. He never forgot Agnes or she him. They wrote to each other for a while, but then moved on.

Ernest Hemingway wrote his novel, A Farewell to Arms, six or seven years later. It is set in Italy in 1918, with the main protagonist a young American soldier badly injured by mortar fire. He is nursed back to health in a Milan hospital by a young American nurse called Catherine Barkley: undoubtedly based on Agnes.

As with Lawrence’s Jessie, Hemingway’s Agnes became a major influence on Hemingway and his work, work that could not have been written had he not been hit by that mortar shell and those machine gun bullets one sunny afternoon below the Dolomites. Hemingway’s bravery on that day earned him one of Italy’s highest military awards. He loved Italy, and probably loved Agnes more than anyone.

Lawrence’s experience of meeting Jessie, although less dramatic and violent than Hemingway’s, created work that Hemingway must have begun to read with the publication of Women in Love in 1921: a novel he loved, and from which he learned so much (early on in his career Hemingway would only admit that Lawrence taught him how to describe landscapes), with volumes of Lawrence’s work always in his ‘book bag’ wherever he travelled. And although Lawrence was fourteen years older than Hemingway, and from a wholly different background, they were literary blood brothers.

There are other examples of such creative influences, not least that of Edward Elgar’s first love, but I shall write about the composer in another blog.